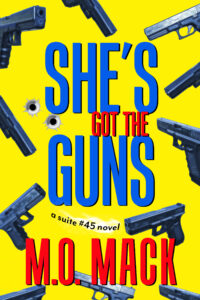 She’s Got the Guns, the Debut Thriller-Suspense from Author M.O. Mack…

What could possibly be worse than being beaten, broke, and on the run from a dangerous criminal? What if that criminal is your ex and works for the FBI?

Oh, and then there’s the tiny matter of landing a job. Not so easy for a girl on the run. Which is why when Emily Rockford gets a gig, answering the phone for a “pest control” company, she thinks her luck is turning.

Until…she discovers the business is a cover.

For hit men. A big, dangerous, deadly group of them.

It’s just about the last place Emily wants to be, but as she’s about to find out, once you’re in, you’re in. There is no out. There is no quitting.

Will she embrace the dangerous world she’s stumbled onto? Or will she find a way to outrun them all? 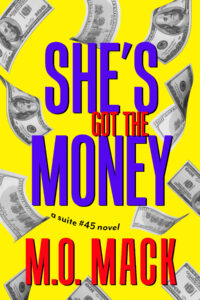 TO SAVE THE HIT MAN SHE SWORE TO WALK AWAY FROM, SHE’LL HAVE TO BREAK ALL THE RULES. INCLUDING HIS RULES.

When Emily escaped her old life, she never imagined ending up here: running the front office for a crew of dangerous hit men. Even worse, now she owes them money for protecting her from her abusive husband. This new situation is ten times deadlier than the life she fled, but every attempt to leave lands her deeper into their world. Especially now that her boss has been taken by some very bad people. And they want money. A lot of it. She could walk away. She should walk away. Because to save him means she’ll have to do the unthinkable. And then there’s no turning back.